This page lists suggestions and resources for flatwater and gentle moving water trips. It looks to cover some easy to access rivers and navigations that are easy to get to from London and the south east of England, as well as covering a few favourites further afield. We have a separate guide for local tidal waters.

The non-tidal Thames offers many paddling opertunites and trips. Using the various backwaters you can make looping trips. It can be a beast when the river is in flood, its always worth checking the conditions

Considering that the Thames is navigable from at least Devises to Westminster, with portages over/around the locks, you just need to choose a section. This section comes through Henley, site of the famous regatta and always busy with rowers either practicing or racing in their own sectioned off strip of the Thames.

A favourite trip of the club, paddling from Wargrave, we get to paddle a figure of 8, using the backwaters of the Thames. Getting to paddle the wide areas of the thames, some faster flowing backwaters and some of the prettiest bits of the area. 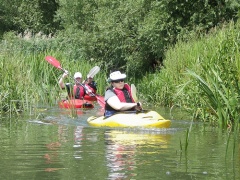 The Thames at Oxford and the Oxford Circuit

The Thames at Oxford offers easy parting and access at a couple of locations. The Oxford Circuit is great paddle with an easy get on that allows you to loop down the Thames and back up the Oxford canal. There are also some great backwaters in the area that can be explored and looping trip created.

There are lots of opportunities all along the Thames. We've hired boats from Thames Canoes for a few trips on the Thames between Henley and Marlow, and a number of padders have done 3 star Open Canoe assessments at different points down the river, as well as racing and training.

Upper reaches of the Tidal Thames

Putting in at Kew Bridge (good parking if you are early and easy access to the water), its possible paddle with the tide either up or downstream. There are lots of potential stops either way. Its a tidal river, so needs planning, and central London traffic can slow down journey to and from the river, but its well worth it to paddle one of the quieter sections of the tidal Thames

A paddle that is local to the club with a few portages. You can walk boats over in about 10-15 minutes if you have strong shoulders or do a quick car shuttle. You can then paddle a loop though the navigation and the river, with lunch in Victoria Park. Its an urban paddle and the water in the Limehouse Cut can be a bit dirty and smelly. Route (in either direction) is Limehouse Cut, the Lea, east through Hertford Union Canal then south on Regent's canal back to Limehouse Basin.

Hire boats on the Lee at Broxbourne'

This paddler offers a prettier area of the Lee Valley, outside the M25. There are backwaters that can be explored offering a nice loop back to the hire centre as well as a number of riverside pubs. Its connected to public transport, on a train from Liverpool Street or Tottenham Hale.

Hire boats on the Stort

A pretty paddle, that runs alongside a train line means its well connected to public transport, on a train from Liverpool Street or Tottenham Hale. It also allows one way trips - shuttling back on the train or having the hire company pick up boats.

Hertford and the Lea North of Enfield

A lovely section of the Navigation, with beautiful scenery with lots of options for trips. Looping trips are possible using the river and the canal, starting at Hertford, parking and putting in near the leisure centre. Note that this section has a couple of generally canoe safe weirs, but may require helmets.

A fairly urban canal but has wooded sections and easy access.

River Wey is a nice bit of water. It links to the Thames from the south.

You can hire canoes to paddle on the Chelmer and Blackwater Navigation: http://www.papermilllock.co.uk/canoe.htm

A well known and paddled canoe trail, it offers a growing number of canoe passes around the locks that allow some fun paddling and playing. Kent Canoes hires boats on The Medway - we've used them a few times now.

The Broads offers many opportunities for flatwater paddling, and many places to hire canoes, though sections can be windy or busy with other watercraft.

The lower parts of the Waveney are mildly tidal and more than a little windy, its a beautiful and remote area. its never runs dry which makes planning a doddle. A branch leads to Oulton Broad, offering a trip with different types of water to paddle in. The Waveney River Centre offers camping and other accommodation, and good put-ins (and might have a few canoes to hire).

The upper parts are a different river completely. You can start near the top, where it starts as a narrow river and paddle past mills to where it branches and flows past Bungay and the loop. It can run out of water though.

The Ant and Bure make up big sections of the rivers connecting the broads - paddling them can provide multiday tours passing through different waters such as Barton Broad. Like the Waveney, the upper sections are more scenic and less windy, but more water dependant.

Running through Cambridge makes this river easy to get to by either train or car and offers a few different paddles. Parking and access is easy at Barton Road where paddling upstream takes you to a more secluded but canoe friendly Byron's Pool and Granchester and a tea shop. Down river runs through Cambridge and then out to Ely, on the way opening out to be a windy fenland river.

The Ouse is more of a navigation than a river, but this means access is easy. What it does offer is some interesting backwaters to go with the easy access

A favourite paddle of many, offering some simple run-able weirs and a camp site halfway along. The river runs away from towns and roads for a lot of its length. Its a well supported canoe trail with managed portages and passes being improved. An Environment Agency guide presents the river well, and an excellent canoeist written guide gives from detailed guidance for portages and weirs.

A mildly tidal river, means planning is needed. Offers pretty bridges and a castle or two. 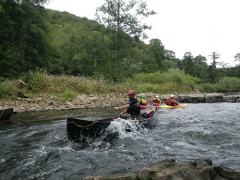 It's not in the south east and not quite flat water touring, but the Wye is wonderful river for trips. It offers some of the most beautiful touring as well as simple riffles and basic rapids (with the exception of Monnington falls and Symonds Yat which require a little care). There is a well written guide to the river that lays out many of the camp sites and access points and acts as a great guide the river.