I had paddled the River Medway from Yalding to Allington with a group of intrepid canoe-a-teers, but wanted to return to paddle the Tonbridge to Yalding stretch in a Kayak. Seven accomplices were recruited for this daring journey. Master Chris, a veteran of many a boating escapade, kindly lent his experience as the leader of the group.

On a smokey Tuesday night, over a barbecued supper on the Basin of Shadwell, with hushed voices we plotted. A cunning plan was hatched that involved maps, shuttles, throw lines, pack-lunches, whistles and spare paddles. Trusty water bound vessels were booked on the forum of the 'Ye Olde Canoe Clubbe of the Tower of the Hamlets', while Master Sven hired a sturdy touring kayak with storage-a-plenty from Mister Elvey of Yalding, and we were set to go. 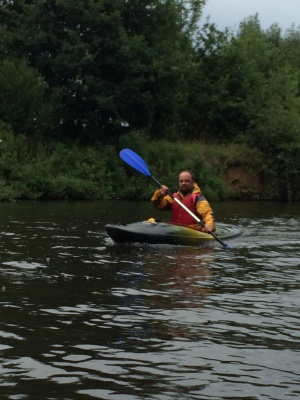 Sven with his hire boat

The group arrived in Tonbridge by boat carrying automobilia at 9:30am. After a short shuttle to Yalding, where I learned of the sailing-boat exploits of Master Chris and Master James, we were back in Tonbridge ready to start our journey, just in time for Master Tom to declare that he was going to wear his helmet all day.

After a short paddle, we needed to make our one and only portage of the day. This was due to the first 'chute' being low on water, with all the bristles showing, all spiky. I'm not sure how long it was after 'the bomb' was found or, indeed, who found it. One had to have their wits about them, and good peripheral vision not be be 'taken out' by it! Who knew that such fun could be had with a foam mini rugby ball toy that had clearly seen better days.

A trio of 'chutes' negotiated and nearing our lunch spot, we were treated to an overhead aerobatic display by two vintage aeroplanes that Master James identified as a Spitfire and a Hurricane, hurrah! After lunch we saw some people in a camouflage boat, and later still heard a battle re-enactment in the nearby woods. Whatever could have been going on? After some internet detective work, it appears we paddled through the 'War and Peace Revival' at nearby Hop Farm Showgrounds.

After shooting the last 'chute' onward we paddled to the Island of Teapots. Master Mungo and Master Marko challenged each other to a thrilling race over a half a furlong. Master Mungo took the honours by the nose of a boat. Meanwhile Master Tom and Miss Cai found a cushioned-television-set-dinner-lap-tray floating on by. By this time it was raining quite heavily, but that didn't stop Master Marko, Master James and Master Mungo from practising their kayak rolling. Once all done, out we got and headed to the Anchor inn to dry out a bit before our journey home.